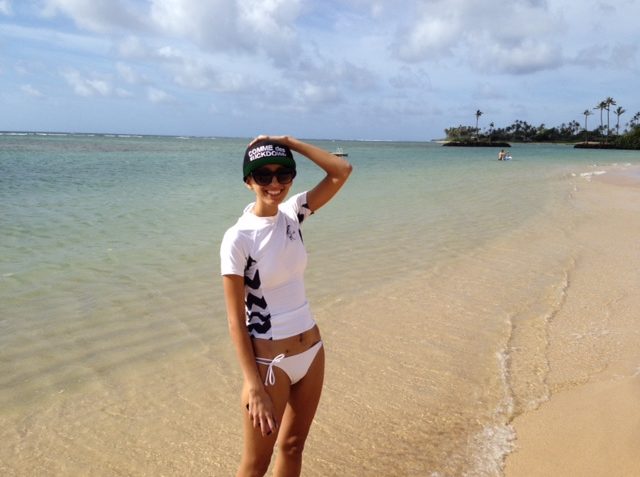 Deanna Pai is a writer from New York. In 2014, she experienced hair loss due to hepatoblastoma, a rare kind of liver cancer. This is her story.

One afternoon, near the end of chemotherapy, I went to the Met with my friend Kevin. Kevin’s one of my oldest friends, but still only a friend despite my long, unrequited crush on him. That’s since faded, but even so, I always feel like I need to impress him. I’d wandered through the museum and pretended to be totally fascinated by the art.

It was warm and sunny, a perfect day in May, so afterwards, Kevin and I took a walk through Central Park. We snagged a bench overlooking the Great Lawn, packed with sunbathers and children and ultimate frisbee players, so I could rest. As we were talking, I saw him look over at a girl passing by and literally lift up his sunglasses so he could get a better look.

“Are you kidding me?” I asked. I took off my baseball cap (scrawled with “Commes des Fuckdown”) and began to fan my sweaty scalp with it, a vision in a black t-shirt and jeans. “You’re gross.”

“I can’t help it!” he replied. “She was wearing a sundress.”

Kevin wasn’t lying. She was wearing a sundress, and had long, shiny hair, and, presumably (although I was too far to confirm) eyelashes. I, on the other hand, was a lump of flesh slowly melting under the sun, frantically trying to keep sweat from trickling down my bald head and into my eyes, since I had no eyebrows or lashes to stop it mid-stream. Maybe Kevin was ogling the girl—or maybe he just didn’t want to look at me.

I fixed him with the meanest glare I could muster, which was pretty mean, since I looked like a creepy, subhuman version of myself.

I have cancer, a rare kind in my liver called hepatoblastoma. When it reappeared in late 2014, I began a tough regimen of chemotherapy, which had equally tough side effects—infertility, hair loss, fatigue so intense that I once thought I might be dying when really, I was just falling asleep. Much to the credit of my boyfriend (not Kevin), I felt not-particularly-hideous during the majority of chemo—even without my hair. Sure, I looked like the love child of me and E.T., but I didn’t make children cry or run away in fear. My self-esteem still hit rock bottom, and I’m not entirely sure it had to do with what I saw in the mirror.

It began in the shower. I never realized just how much I loved taking showers until I couldn’t.

I used to take my time in the shower, scrubbing my hair and letting the bathroom steam up while I listened to my favorite morning radio show. Once I started chemo, I began to wear a ridiculous pink shower cap in an effort to preserve my hair. I looked like someone’s great aunt. But even worse was that it felt like total sensory deprivation. I couldn’t hear the radio through the cap. I gently splashed water on my face, terrified it would seep beneath the cap’s edge and weigh down my hair, coaxing it out. Afterwards, I’d carefully lift off the shower cap and inspect my hair. Did my part look a little bigger? Should I bother brushing out the monster dreadlock forming on the crown of my head? (No.) I held my breath as I looked at it in the mirror, not dampening it or brushing it or touching it in any way. I thought that if I kept my hair healthy by not exposing it to water or my blow dryer or my hands—and really, truly believed I wouldn’t lose it—I’d keep it. Mind over matter, or something like that.

But this isn’t how chemo-induced hair loss works. I lost my hair a few weeks later, during my second round of chemo. In a way, it was a relief. I could finally go back to showering while listening to the radio and rinse off without worrying about water getting everywhere. I felt like I was living the dream.

Until one day, I went to suds up and realized my armpits were bare – hair gone. (I know, I know. How bad is it not to have to shave your armpits? It’s like complaining about having too many pairs of shoes.) But I didn’t have any hair to shampoo. I couldn’t slop on conditioner, or shave my underarms. I had to just hang out in the shower, wondering what in the world men do—just stand there and stew in their own filth? Sometimes, I’d rub shampoo into my bare scalp in order to do something. Other times, I’d inspect my body to find hair I could shave, just for kicks. That game grew old once I lost it all:  leg hair, arm hair, even (sorry) the little hairs on my knuckles.

The timing was incredibly inconvenient. It was the dead of winter, during which I like to take luxuriously long, hot showers to thaw from the cold (dry skin be damned).  But I had no excuses to stay in the shower. Before long, showering turned into a chore, and a hard one at that. The chemo drugs had so sapped my strength that I’d carefully climb in and then curl up in a ball on the floor of the tub. I sat there as I poured out my body wash and, still, shampooed my bald head. I felt like Gollum. I kind of looked like him, too.

I missed my beauty rituals as much as I missed my hair itself. I even missed shaving my legs. Before this, I’d never thought about what these daily habits meant, and how they influence the way I perceive myself. It was weird because it wasn’t even strictly female things, like using a tampon (which I couldn’t do, either, since chemo forced my body into menopause—hot flashes and all).

Later into treatment, I began to find eyelashes scattered across my sink, on my pillow, all over my fingers after I took out my contact lenses—despite all of the lash growth serum with which I’d doused them. I quit mascara and doubled-down on the serum, but I’d reached a point of resignation that was almost apathetic, like, “Oh, well. My eyelashes called it quits.” I was more worried about keeping dust out of my eyes than anything aesthetic.

But my eyebrows were different. I’d had full, thick, Italian eyebrows. I watched as they grew thinner and thinner until they disappeared altogether. Their absence transformed my face, even though I still carefully painted them on with my favorite tinted brow gel. Without eyebrows, my face looked puffy, and I looked like a cancer patient. Not a girl, not a woman, not a female, but a cancer patient. Someone sick.

And sure, a part of feeling like a sick person was looking into the mirror and seeing one. Part of it’s in the pain and the weakness and weekly appointments. But part of it, too, was in being stripped of the most basic aspect of life: taking care of myself. You wake up. You brush your teeth, take a shower, brush your hair, apply mascara. What happens when one, or two, or most of those are taken away? It has a ripple effect beyond “I’m bored in the shower,” or “I miss tweezing my eyebrows.” It hacks away at your identity. Regardless of how I actually looked, I didn’t feel cute, or pretty, or worthy of a guy pushing his sunglasses all the way up so he could get a better look at me. I didn’t look—or feel—like a girl.

Nine months after that day on the park bench with Kevin, I have hair now. It’s on my legs, under my arms, on my face (still). The hair on my head came back, too, but I’ve continued to cut it instead of growing it out to get the thick, curly mane it once was. For awhile, I couldn’t figure out why I wanted to keep it so short, a closely cropped pixie, while my lashes are long and my brows are thick. And then I decided that looking for a reason was useless. Who cares? I want it short, and that’s the only thing that matters. Because really, it’s not the hair that makes the girl—it’s the girl that makes the hair.