New research conducted by FOREO, the brand that has re-invented the oral care category with the launch of its ISSA 2 toothbrush, has revealed that Brits are not taking care of their teeth, neglecting them with poor brushing routines and infrequent visits to the dentist.

While most of us know that we should be brushing our teeth for at least two minutes, twice a day, this new research conducted amongst the UK population revealed that almost a quarter (23%) of Brits have gone two days or more without brushing their teeth. With nearly half (44%) of 18-24-year olds being guilty of this dangerous habit and nearly a fifth (19%) of this age group even going longer at three days or more. More than one in five 35-54-year olds have not brushed their teeth when they are drunk.

Men are also far more likely to neglect their teeth, with nearly a third (29%) having forgone brushing, compared to 17% of women. The data suggests that hygiene at home could certainly be improved, with 20% of people brushing their teeth just once a day.

“It is concerning to see that so many people are neglecting their oral health routine at home, brushing less frequently than UK guidelines would advise. Certain bacteria on the teeth use the sugars from your food to produce acids, which in turn eat away at your enamel. This is why it is so important to be brushing for two minutes, twice a day with a good electric toothbrush, like the FOREO ISSA 2, that promotes overall oral health.”

Too Busy to Brush

So, what is causing us to steer clear of the bathroom sink? Nearly a quarter of people (23%) said they have skipped brushing their teeth because they are simply too tired, with over a third (40%) of time poor Londoners saying that they only brush their teeth for a minute or less when they are doing it.

“While not brushing on occasions where we are tired can seem like a harmless one off, not caring for your teeth can lead to unpleasant consequences such as fillings and even extractions. It is important that we don’t neglect our teeth and just four minutes of dedication each day can go a long way to steering clear of problems down the line. It can be really hard to know when you’ve done the full two minutes, so choosing a toothbrush with a built-in timer like the FOREO ISSA 2 can ensure you do it for long enough, whilst also not overbrushing – which can also cause issues. Your teeth may seem like they are in good condition now, but they won’t stay that way unless you look after them”, says Dr Hughes.

It’s not just the frequency of brushing which seems to be a problem in our homes, the length of time we are spending caring for our teeth is also suffering. While the NHS recommend that we brush for around 2 minutes each time, nearly half of people (48%) brush their teeth for less than this, and over a quarter (26%) of people only brush their teeth for up to a minute.

This lapse approach to oral care is also extending to our visits to the dentist. Over half of adults (51%) don’t go to the dentist every 6 months, and while some dentists believe some patients don’t need any more than this, many dentists still believe that a visit every six months will maintain healthy teeth. Shockingly nearly one in five people (19%) visited the dentist less frequently than once per year, and 4% have never been. 1 in 5 people (21%) said that their fear of the dentist prevents them from going more frequently.

“It is important to visit the dentist or a dental hygienist frequently, even if you feel that your teeth are in good condition. Your dentist will be able to spot any problem before they occur, often a simple change of habits could prevent things getting worse. If you are a nervous patient, speak with your practice, they will be able to help make you feel more at ease during your check-ups.” 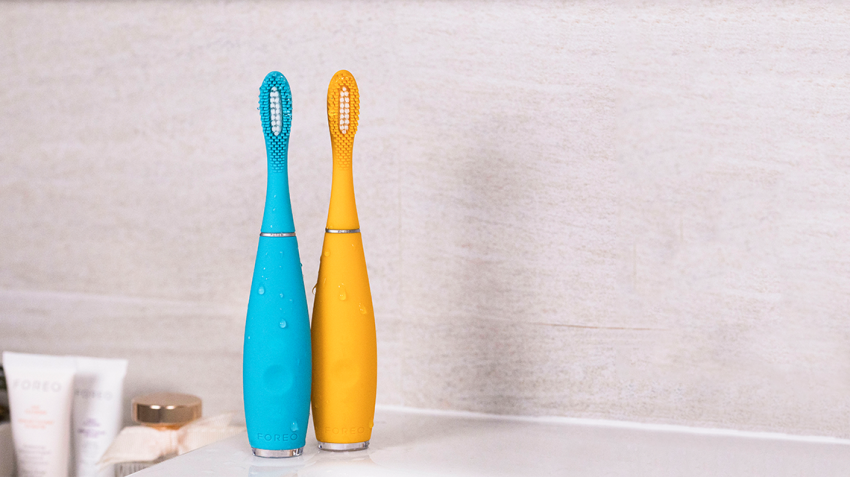 About the FOREO ISSA 2, RRP: £149, available at John Lewis and Boots.com

The FOREO ISSA 2 is the latest version of the world’s first electric toothbrush with 2 bristle types made from medical grade silicone and PBT polymer. This innovative design provides a professional and gentle clean thanks to ultra-soft, hygienic bristles that gently hug gums and remove plaque. With an impressive 16 adjustable speeds and sonic pulse technology that uses up to 11,000 high-intensity pulsations per minute, the ISSA 2 offers a whole mouth clean and lasting freshness.

Survey conducted by Atomik Research on behalf of FOREO among 2,002 UK adults aged 18+ including 1,000 parents of under-16s.