BLOG > SKINCARE > Everything About Rosacea: Don’t Let the Red Face Ruin Your Self-Esteem

Everything About Rosacea: Don’t Let the Red Face Ruin Your Self-Esteem

Rosacea is a skin condition that can affect anyone, but it is most commonly seen in people with fair skin. The main symptoms are a red face, swollen and inflamed eyelids, and bumps on the nose.

While rosacea may not be life-threatening, it can certainly be life-altering. It can cause a lot of embarrassment and self-consciousness, especially when it flares up. If you’re dealing with rosacea, don’t worry – you’re not alone.

This article will provide you with all the information you need to manage your condition and keep your confidence high.

Rosacea is a chronic skin condition that causes redness and inflammation in the face. It can also cause swelling, bumps, and pimples. Rosacea typically starts in adulthood and affects people with fair skin. In some cases, it can run in families.

Who are the most affected people?

Rosacea affects people of all ages, and anyone can develop rosacea. But, it is most common in adults over the age of 30. It is more common in women than men, but men are more likely to develop severe symptoms. Rosacea is also more common in people with fair skin.

There is no one definitive cause of rosacea, but there are several theories about what may contribute to the condition.

Still, another theory suggests that rosacea is an autoimmune disorder. This means that the body’s immune system mistakenly attacks healthy tissue.

There are several external factors that can trigger or worsen rosacea symptoms. These include:

What can rosacea often be confused with?

There are some skin conditions that are often confused with rosacea, such as eczema, psoriasis, and allergies. Still, two kinds of skin conditions can be especially confusing: 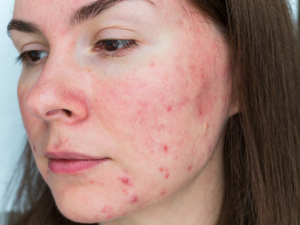 The symptoms of rosacea can vary depending on the subtype. The most common symptoms are:

How to treat rosacea?

There is no cure for rosacea, but there are treatments that can help manage the symptoms.

The most common treatments are topical medications, such as creams, gels, or lotions. These can help reduce the redness, swelling, and inflammation.

Oral medications, such as antibiotics, can also be effective in treating rosacea. These work by reducing inflammation. Still, these are the most popular and effective treatments that people with rosacea use.

Electrocoagulation is a treatment that uses electric currents to destroy the blood vessels that cause redness. This is a minimally invasive procedure that can be done in a doctor’s office.

Still, this solution can be a little aggressive and painful, and it often leaves some marks the following days, but which fade over time.

Light therapy is another treatment option that can be done in a doctor’s office. This treatment uses intense pulsed light to reduce redness and inflammation.

One of the most popular lights in LED light therapy for rosacea is blue and red light therapy. These colors help reduce inflammation and kill bacteria.

This solution is painless and has no side effects.

Laser treatment is another option that can be done in a doctor’s office. This treatment uses lasers to destroy the blood vessels (even the small blood vessels) that cause redness.

This solution is also painless and has no side effects. There are different types of lasers that have been developed against rosacea:

There are several creams that can help with sensitive skin and symptoms caused by rosacea. Some are sold without a prescription, but it is best to ask your dermatologist for advice. 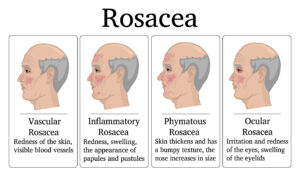 This type of cream can help reduce inflammation and kill bacteria.

This is another favored ingredient that can help with this chronic disease. It’s quite aggressive but it will help with persistent redness.

Brimonidine is one of the new treatments recognized for its effectiveness. This vaso-constrictor applied to the area affected by rosacea makes it possible to significantly reduce the visible redness. Its main drawback is its high price…

Ivermectin is usually used as an antiparasitic, and may also be prescribed for mild rosacea, before turning to antibiotic treatments as a last resort. Like brimonidine, ivermectin is part of the new treatments against rosacea, used recently and with encouraging results.

There are also many gels and serums you can use to combat rosacea or redness in general. Those products often contain vitamin A, vitamin K, or omega 3 and 6, but you can ask your pharmacist for advice to test the product that will be a proper treatment for you.

When topical treatments are not enough, your doctor may prescribe oral medications. These are antibiotics that help reduce inflammation and facial redness.

Tetracyclines are the most commonly prescribed oral antibiotics for rosacea. These include doxycycline and minocycline.

Beta-blockers are another type of oral medication that can help reduce redness. These include propranolol and atenolol.

Drugs that contain clonidine can also be very helpful for taking care of broken and visible blood vessels on your face. Namely, blood vessels that have become dilated and cause redness.

Another class of oral medications that can be effective against rosacea is calcium channel blockers. These include nifedipine, which is often prescribed for people with rosacea.

Effective especially when the first symptoms appear, some natural remedies can help you overcome your rosacea before turning to more invasive drugs.

Aloe vera is a plant with many virtues, and it is also effective in the fight against rosacea. Indeed, aloe vera has soothing, anti-inflammatory, and antioxidant properties that will help you relieve the first symptoms of rosacea and calm your skin.

Chamomile is another very effective plant against rosacea. Like aloe vera, it has soothing, anti-inflammatory, and antioxidant properties. Chamomile will help you relieve the first symptoms of rosacea and heal your skin.

Green tea is also very effective in the fight against rosacea. Green tea contains catechins, which are antioxidants that help protect the skin from inflammation. Green tea will help you soothe your rosacea and heal your skin. 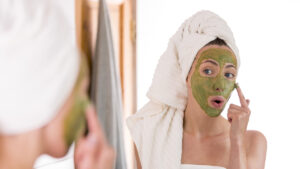 Thanks to its antioxidant properties, green tea is a great natural ingredient that will help treat rosacea.

Rosehip oil is also very effective against rosacea. Rosehip oil is rich in essential fatty acids, which help to soothe and protect the skin. Rosehip oil will help you relieve the first symptoms of rosacea and heal your skin.

Manuka honey is a type of honey that is very effective in the fight against rosacea. Manuka honey has antibacterial, anti-inflammatory, and antioxidant properties. Manuka honey will help you relieve the first symptoms of rosacea.

Calendula is a plant that has many virtues, and it is also effective in the fight against rosacea. Calendula has soothing, anti-inflammatory, and antioxidant properties. Calendula will help you relieve the first symptoms of rosacea and heal your skin.

Can you prevent rosacea?

Yes, there are things you can do to prevent rosacea.

First of all, it is important to protect your skin from the sun and other sources of heat. For example, you can wear a hat or scarf when you go outside.

It is also important to avoid triggers that can cause rosacea flare-ups. These triggers can be different for each person, but some common triggers include alcohol, spicy food, hot drinks, and cigarettes.

Finally, it is important to take care of your skin. For example, you can use a gentle cleanser and moisturizer. You can also use sunscreen with an SPF of 30 or higher. 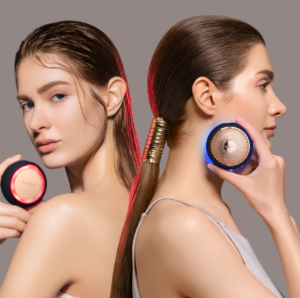 Using UFO devices in your everyday skincare routine means enjoying in LED light therapies that can be very effective when it comes to treating rosacea.

As we already mentioned, blue and red LED lights are very powerful when it comes to preventing redness and itchiness. Besides these two LED light therapies, UFO device has six more light wavelengths. Each colored light has a different wavelength that penetrates your skin at different depths.

WHITE LED – Tones and tightens the appearance of skin and reduces puffiness.

ORANGE LED – Revitalizes and awakens skin for a healthy glow.

This out-of-this-world device will definitely change your skincare routine. For better, of course!

Get your UFO device now!