BLOG > WELL-BEING > Can Keeping Secrets Enhance Our Well-Being? Find out in “The Secret Life of Secrets”

Can Keeping Secrets Enhance Our Well-Being? Find out in “The Secret Life of Secrets”

Everybody has secrets. Think of a secret that you’re keeping from others. It shouldn’t take long; behavioral scientist Michael Slepian finds that, on average, we are keeping as many as thirteen secrets at any given time. His research involving more than 50,000 participants from around the world shows that the most common secrets include lies we’ve told, ambitions, addictions, mental health challenges, hidden relationships, and financial struggles.

Our secrets can weigh heavily upon us

Our secrets can cause us shame and anxiety and lead us to act in ways that are harmful to ourselves and others. In The Secret Life of Secrets Slepian tackles the science behind secrets—why we have them, how they affect us, and what we can do about them.

Slepian begins by defining secrets—something that is hidden from others because it’s embarrassing, painful, or both—and distinguishing them from privacy (something we intentionally keep to ourselves) and lies (a deliberate attempt to deceive). He then reviews the scientific literature on secrets, finding that they are linked with poorer physical and mental health, as well as worse work performance and relationships. 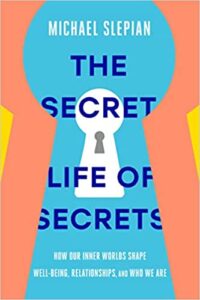 In The Secret Life of Secrets Slepian tackles the science behind secrets—why we have them, how they affect us, and what we can do about them.

Secrets have a ripple effect

Secrets can also have a ripple effect, impacting not just the person who is keeping the secret but also the people around them. In one study, Slepian and his colleagues found that when people were keeping a secret, they were more likely to judge other people harshly and to be less helpful to others.

The impact of secrets is not always negative, however. In some cases, secrets can actually be helpful. For example, Slepian has found that people who keep their weight loss a secret are more likely to be successful in losing weight and keeping it off. The Secret Life of Secrets is a fascinating and timely book that will change the way you think about secrets. It’s a must-read for anyone who wants to understand the science behind secrets and how they can impact our lives.

Filled with fresh insight into one of the most universal—yet least understood—aspects of human behavior, The Secret Life of Secrets sheds a fascinating new light on questions like: At what age do children develop the cognitive capacity for secrecy? Do all secrets come with the same mental load? How can we reconcile our secrets with our human desires to relate, connect, and be known? When should we confess our secrets? Who makes for the ideal confidant? And can keeping certain types of secrets actually enhance our well-being?

Why should you read it?

We all keep secrets, but it turns out that our intuitions of what to do with them are often wrong. The Secret Life of Secrets sheds light on why we conceal, and the power of confessing, confiding and letting go.

I loved this book! There was a great balance between describing the scientific findings about secrecy, interesting stories, and helpful advice. It made me think about what I share with others and why in totally new ways. I also loved hearing about the study of secrecy in animals, and the development of secrecy in children. Highly recommend!

Finished the book in 2 days – was hard to put it down after reaching to the end of each chapter. Reading it got me to think about the social closeness between me and the others in my daily life. I’m the kind of person people share a lot of their difficulties and hardships to, even if we haven’t known each other for long. It creates an interesting bond between me and the others and this book helped me to rationalize it and be more comfortable with it.