BLOG > WELL-BEING > LIFESTYLE > “Strangers to Ourselves” by Rachel Aviv: How to Deeply Understand Yourself?

“Strangers to Ourselves” by Rachel Aviv: How to Deeply Understand Yourself?

The acclaimed, award-winning New Yorker writer Rachel Aviv offers a groundbreaking exploration of mental illness and the mind, and illuminates the startling connections between diagnosis and identity. Namely, she probes her own and others’ lives to suggest how the stories we are told by the medical profession about our struggles can both help and harm.

In “Strangers to Ourselves“, a powerful and gripping debut, Rachel Aviv raises fundamental questions about how we understand ourselves in periods of crisis and distress. Drawing on deep, original reporting as well as unpublished journals and memoirs, Aviv writes about people who have come up against the limits of psychiatric explanations for who they are. Incorporating deeply reported portraits of several people, including herself, Aviv’s debut considers the fundamental ways in which we do — and don’t — understand mental disorders.

Namely, in her book she follows an Indian woman, celebrated as a saint, who lives in healing temples in Kerala; an incarcerated mother vying for her children’s forgiveness after recovering from psychosis; a man who devotes his life to seeking revenge upon his psychoanalysts; and an affluent young woman who, after a decade of defining herself through her diagnosis, decides to go off her meds because she doesn’t know who she is without them.

How do you explain yourself?

We learn about these people one by one, with a chapter for each, so that Aviv can recount their lives in detail and therefore in full. She interviews doctors, friends and survivors; she reads her subjects’ journals in order to get a grasp on how they explained themselves to themselves. In this way, she uncovers the hidden stories that shape our understanding of mental illness.

The result is a nuanced and compassionate view of mental disorders, which challenges the simplified stories we often tell about them. Aviv’s book is essential reading for anyone who has ever struggled with their mental health or been close to someone who has. Challenging the way we understand and talk about illness, her account is a testament to the porousness and resilience of the mind. 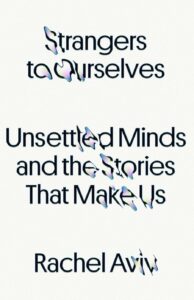 In her debut, Rachel Aviv challenges the dominant narratives around mental health and offers a more nuanced and compassionate view of mental disorders.

A necessary and timely book

“Strangers to Ourselves” is a brave and searingly honest investigation into the stories we tell about mental illness. In her debut, Rachel Aviv challenges the dominant narratives around mental health and offers a more nuanced and compassionate view of mental disorders. This is a necessary and timely book that will change the way we think about mental illness.

And here’s what others say about this book:

“Writing with uncanny empathy and integrity, Rachel Aviv illuminates the ways that culture shapes our perceptions of mental illness and who is deserving of care. “Strangers to Ourselves” is a work of landmark reporting that is truly heartbreaking and astonishing.” – Cathy Park Hong, author of “Minor Feelings: An Asian American Reckoning”

Perceptive and intelligent . . . Aviv applies her signature conscientiousness and probing intellect to every section of this eye-opening book. Her profiles are memorable and empathetic . . . Aviv treats her subjects with both scholarly interest and genuine compassion . . . A moving, meticulously researched, elegantly constructed work of nonfiction. – Kirkus Reviews

Intimate and revelatory . . . attuned to subtlety and complexity . . . This isn’t an anti-psychiatry book― Aviv is too aware of the specifics of any situation to succumb to anything so sweeping and polemical . . . a book-length demonstration of Aviv’s extraordinary ability to hold space for the ‘uncertainty, mysteries and doubts’ of others. – Jennifer Szalai, New York Times